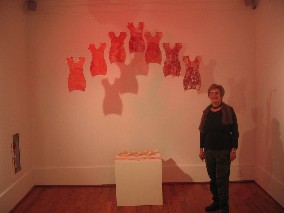 Liliana Fijman was born and raised in Cordoba, Argentina and emigrated to the US with her husband in 1972. As a child growing up in rural South America, she found an early classroom in the forms and shapes of nature around her. Later, as an adolescent her earlier observations and musings were given a voice and mode of expression through her study of film and photography at the University of Cordoba Art College. After a pause, that included raising two children, her formal art education was completed at Rhode Island College in 1984. After graduating, Liliana actively worked with oil paints, photography and silk screening, occasionally displaying her works in local shows. Through continuing education courses at the Rhode Island School of Design she was introduced to papermaking and paper arts. The organic forms and processes involved quickly harkened back to recollections she had from early childhood and invigorated her work and expression in a new direction. She has since gone on to make paper arts her primary medium and has had pieces featured in galleries and books, both locally and in her native Argentina where she maintains active collaborations with local artists.